The Cube’s still a bit understaffed and overstretched due to various viri / bad colds doing the rounds. The Moog night was great, with an amazing performance by the ‘band featuring members of portishead’ but only half of it was videoed and only on one camera ( flusteredly by me ) and no audio recording was made

here they are setting down after . . .

I thought the film was great too, I bought the t-shirt in fact.

I was looking forward to a proposed second screening but the producer, Gary Hustwit ( who’s Q&A did get recorded ) ending up taking both copies away, even the dodgy one that faltered in the screening. Instead Lady, Hog and me stayed up chatting gossip and rumours to the early morn.

Many jovial comparisons were made with my m.o. as he’d been up for nights and we were waiting until the last moment for him to arrive, but I’m glad I’ve never been in the unenviable position of not actually being able to deliver on arrival, poor fella.

Didn’t turn out too badly though as we got a rare chance to see the film straight . . . eventually after much technical fiddling ( for a while it looked like we might get his adapted subtitles, but even this didn’t work ). 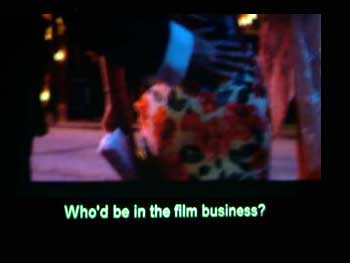 As well as the rescoreless version – which was well worth seeing, all present were invited back for the rescored version off burnt dvd in the future free of charge. Those left in the auditorium seemed to take it all in good humour, still quite a few who didn’t stay did demand their money back.

Staying in China and back to T-shirts – I finally got a Ginseng T, as featured bizarrely in the Japanese campaign.