So it’s Novemeber 30th, the scene is the Watershed and Mr Hopkinson is doing his thang again 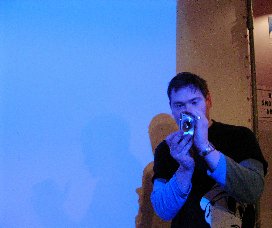 . In cahoots are The Cube Orchestra. It was the start of Watershed’s Electric December thingy, no doubt you all know about it already as you’re clever and groovy enough to be reading The Cube Blog. Well anyhow everyone who was everyone was there, including recent Arnolfini writer in residence (where she had her excellent new book ‘Ride On’ launch by the way) local Poet and writer Claire Williamson 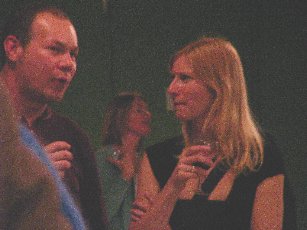 now the fact that she’s also Mrs Paradise is purely coincidental……..
Tho Orchestra also had its Kobe contingent, Yoshino here 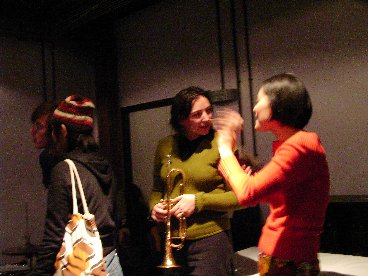 is getting animated (kind of apt for the Watershed I guess) with our resident antipodean Belinda, all part of our prematch psych up. Tomoko and Akira were also there Nippon fans. 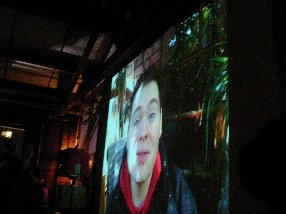 We were quite literally spellbound by H’s rugged good looks, he’s kind of The Cube’s Marlon Brando, or at his most manic The Joker 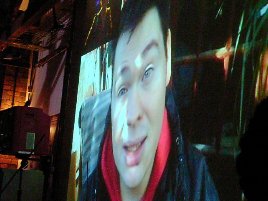 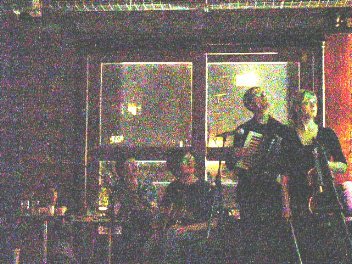 We were as usual cast either side of the screen, on my side me, Ale, Tomoko, Akira, Belinda and Yoshino (the cultural side if you like featuring 3 Japanese, an Aussie, a Chilean and, er, a very Exotic, slightly Romanesque, Bristolian. On the opposite side 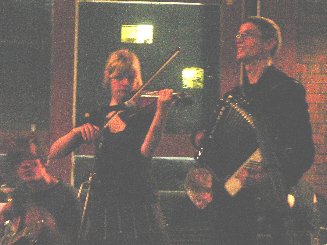 Ellie (confusing us by playing Violin rather than flute this time), Richard, Charlie (on his debut) and Marcus 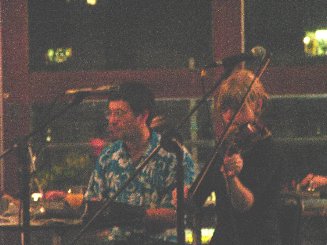 The audience warmed to Mr Hopkinson’s and our madness and didn’t seem to mind that we got confused easily when we were supposed to play separately when the screen split in two. It was a very odd gig, lacked the warmth of The Cube but it was still nice to get out there and play to another audience 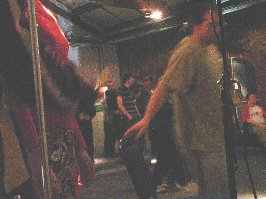 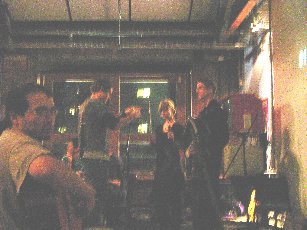 .
Well the big head seemed to enjoy it anyway 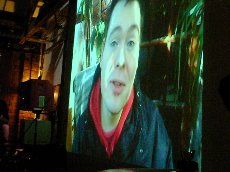 After that more Mr Hopkinson weirdness with his crazy Computer Sings

project, but Mr Hopkinson himself will have to tell you about that.

Thanks for all who came and supported,
Ciao for now children