On Wednesday I made a long overdue actual Cube appearance. Firstly to help Hogge with tweaks for the edit suite computer. As usual, when computers are involved, time went a bit funny and things overran so I missed the begining of the first Peterless Orchestra Cube . . . 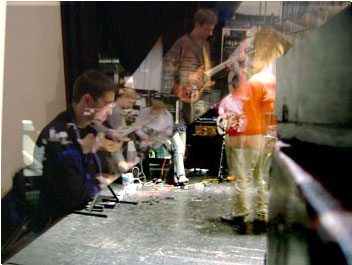 It was a small gathering – Jesseless, Richieless and completely femaleless too – and with only 6 members present it could be described more like a band than an orchestra.

Still, as ever, in any permutation the OC is an interesting thing. I was using a CDJ-800 and Kaoss Pad this time and actually had a hand in leading one piece based on a mutating vocal loop groove rather than just squiggling on top.

I also stuck around for the next event . . .

. . . readings by authors who contributed to the collection of short stories ‘Croatian Nights’, Borivoj Radaković ( who ws also one of the editors ), Edo Popović and British author Toby Litt, who was involved partly due to the success of ‘All Hail The New Puritans‘ in Croatia. ( another Toby Litt Guardian link here ).

I wish I had known about it before and had brought some dv tapes to archive it – the auditorium lends itself well to spoken word ( as I’ve said before ).

Here they just read select passages, but apparently in Croatia they do marathon reading sessions of whole stories. It was a great event, that even though it would have been good to record, stumbling across things like this is one of the greatest things about The Cube, I reckon.