Hey baby how yew doin’? Once again The Cube Orchestra was Maestro less, perhaps his guest appearance with Sculpture last week did him in I don’t know. Anyhow good ol’ Bel lead from the front 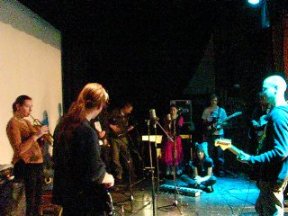 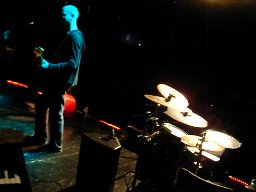 A huge turnout, including one newbie, Will (seen here with relative newbie Adam the Wolfman) 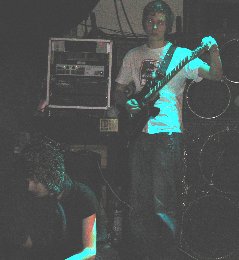 A grand total of 11 under Bel’s leadership, Didn’t she do well ladies and gentlemen? A round of applause paleeese
In case your wondering where I am in the pics above, well it’s kinda difficult to take good pictures of everyone with me in them to, but fear not, I’m still as handsome as ever.
We started off just damn well going for it, and then moved over to the invisible conductor thing, which worked quite well, though for my tastes the 3 geetars were just tooo darn loud (somethings never change), so a little mention of bringing it down a bit and more sparcity and we had a nice ballsy Bel number again, with tips of the hat to New Orleans. Nice.

Barry turned up sins instrument, so he improvised

YES THAT IS A BUCKET HE’S PLAYING SEE 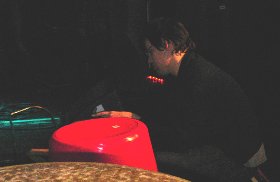 . He also used a tin and a paintbrush, though he may have been decorating as well I’m not sure.
I rarely do marking (only joking OFSTED) but top marks to the old school like Mark, Bel, Marcus and
Hugh (with his fancy new bass, though not in this pic)

who went at it with some aplomb. Simone on violin also went for it with some verve, a spirit that is to be encouraged. Right on. 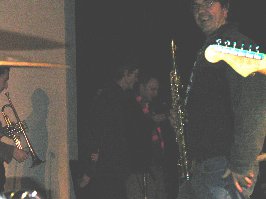 Now how often can that be said of an Improv musical experience? (hey I’m kinda being facetious here ‘cus we took some time before we really got going but you’re good people, you now where I’m coming from). 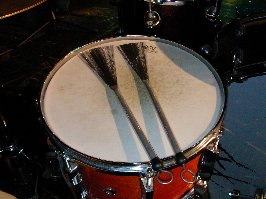