May brought us Zuleika Zeigfield’s second ever Cube Cabaret, a cheeky tip of the hat to the great days of the Ol’ British Musichall, with a dash of striptease for good measure. As ever the Hosts looked simply divine 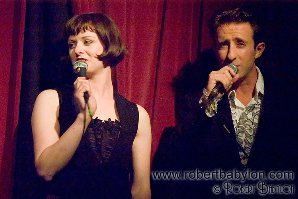 being seasoned pro’s our repetoire was both witty and well informed, as you can see HERE (turn your head sideways though). All the pics (bar one) were taken by Professional photographer Robert Babylon by the way. Robert has quite a reputation so it was an honour having him there to document the night. And Meg Paradise took all the video footage, thanks honey.
What a show we had! A medium sized, highly vocal and very appreciative audience not only had Bristol’s favourite Dandy Stanley Forbes 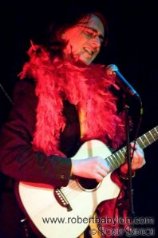 but a whole plethora of acts to wet their appetite, including special guests (a bit more on that later popfans). Stanley’s band seemed to be made up of celebs, Fran Cotton being one and I think Sigmund Freud another. Anyhow if you want to see them in action clip HERE
Mr. Alexander Thomas was next with his Thereminovox.

Though some thought they’d stumbled upon a seance his mastery and skill over his instrument was admirable and quiet quiet moving.
A quick costume change by yours truly: 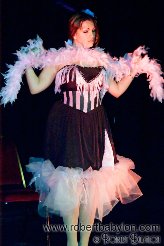 A short break and then our special guests A HAWK AND A HACKSAW FEATURING THE HUN HANGAR ENSEMBLE!

Unbelievably good, sensational even. My thanks to them and Mark Slater and Chiz who phoned me up asking if The Cabaret Gang would like them to play as a warm up before their tour. The audience asked for more so I got them to chant in Hungarian More! (forgotten what it was now) and they blessed us with one more fine fine tune. Click on the links above and you’ll get a taste.
A quick break and a quick costume change:

and then we had our final 3 acts. the crazy and insane Ziegfield players

WOW. What a night, and yet, and yet there was more because in the Bar I Am The Mighty Jungulator‘s Matt was spinning showtunes (YES showtunes), to which punters and staff alike strutted their stuff

Matt is one of the maddest looking (and loveliest) people around so I wasn’t that surprised, I wonder if Tricky is also into the hits of Doris Day……………………..

Thanks to everyone who came, worked and performed, The Cabaret Gang love you.

6 Responses to CARRY ON ‘CUBE CABARET ‘