TV on the wain you know

Well, I’m feeling under the weather and excuse me for lashing out at a super soft target, but, after being laid up in bed and subjecting myself to ‘The 100 Greatest TV Treats of 2004’ and ‘Winners and Losers 2004’ I wish I’d taken the advice of the 2004 January Cube programme and taped up my telly and chucked it out. 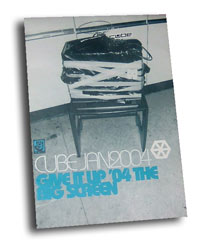 The torrent of shameful shite picked for the year was sickening, {big-}brethren.

For me it was a demonstration of a seemingly never ending gush of this cheap tv sewage that creates, and maintains, a horrendous appetite for titillation through completely unnecessary and abhorrent humiliation of others, and so ultimately the viewer.

Shows the wonders that us sentient beings are capable of, eh?

I suggest searching out bittorrent and downloading one of the unmentioned tv highlights, like ‘Power of Nightmares’ or ‘Oz’, or continue ploughing through your long lost Buffies or something, or . . . or whatever, frankly, I’ve lost the will to watch or suggest.

So, happily, I say good riddance to 2004. A year where idiots on all scales, from innocuous buffoons such as George Bush, Joe Pasquale or the-boyfriend-of-someone-who-was-in-a-reality-show-the-year-before to frighteningly empowered mindless bullies like Gordon Ramsey or Chris Moyles were all glorified as “winners”, and meanwhile, we are all losers – through the loss of the unmentioned John Peel, seemingly now ( in my blind fury ) the only public figure who was ever genuine, intelligent, dignified, kind and funny.

This entry was posted in General, pretend you're more highbrow than you are, weather. Bookmark the permalink.

2 Responses to TV on the wain you know