Later on Thursday I went to meet old Bristolian ( presently in Kent ) and sometime Cube frequenter, Phil Hall who was down for the Animated Encounters festival. On the way I encoutered Frï¿½nï¿½ois and Mark . . . 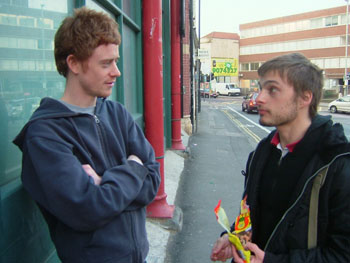 . . . who were on their way to work at the Cube – Frï¿½nï¿½ois behind the bar and Mark putting in an all too rare Asteroth appearance rescoring the 1949 film “Alcohol and the Human Body“. I had hope to catch this with Phil but we ended up elsewhere doing our own research into the same topic – Phil had been asked at the last minute in provide a pitch for the “Cartoon Network Gong Show” ( details on the A&E site. ) in exchange for free tickets accommodation and, to a larger extent drink, in particular the produce of sponsors bath ales . . . 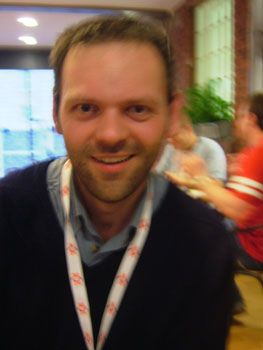 . . . haphazard badgery messiness ensued, via a free bar at Byzantium and concluding with Pizza at Renato’s with, unless they were fibbing, the Director of The National Film & Television School and a fighter pilot.

It looked like the woman who was looking after everyone did a runner after getting them to the restaurant, but I think it only looked like it . . .

The next day, Friday, after checking out the exhibition at Centerspace, I did make it to The Cube for the Electrotrash night, and was surpised the effect a few packets of McCoy’s Salt and vinegar crisps can have on a room on people previously all in front of computer screens . . . 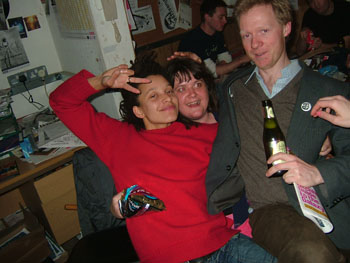 Though I did see some one or two interesting things on computer screens, mind.

Got even busier later, including the arrival of birthday boy Hogge.

As sometimes happens, I was one of the last to leave – this time with Lady and Tom Taylor . . . 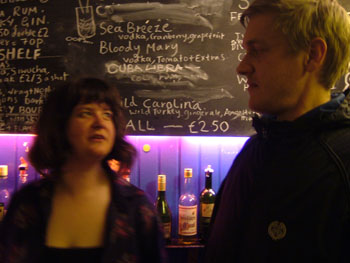 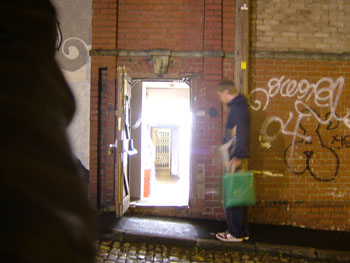 Tom, down to do projections for . . . Animated Encounters