Ok, well ( too many ) things keep happening, but I keep failing to document them – always the way when there’s stuff to write about you’re too busy doing it to write about it etc . . . I may get time to fill in the recent gap, I may not . . . anyway, today . . . 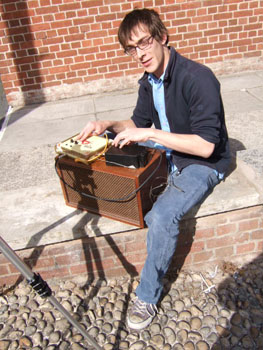 . . . for my Cut-up project. By the way, that pic is taken with my new backup camera, in use while my usual one is off for it’s 3rd repair !

Coming to video Tom, carrying camera bag and tripod for that, and going on directly to the Orchestra, carrying CDJ Deck and Kaoss pad for that ( plus the usual stills camera and mp3 player ) , I was rather overloaded. However, due to an email misunderstanding I arrived half an hour late for the orchestra and all the Amps were taken, so never got a chance to use the deck but took the opportunity to record some video of the proceedings.

There seemed to be more attendees than in recent weeks. Everyone was formed in a circle, but ( while I was there at least ) there was direction – mainly from Rich and Ali’s direction ( pictured on the far left on the right hand pic above ).

Various methods were employed, including playing colours – first everyone played “red” and then “green”, then multi-coloured where each player was assigned their own colour leading to faux Reservoir Dogs squabbles possibly prescient of Movieoke.

I recorded some audio onto my mp3 player before I left, and though distorted, really enjoyed it as I lugged my stuff back.

I was meant to be making a DVD archive copy of the Sky Captain rescore with Jem in the evening, but an email from Tom had alerted me to the Bruce Haack film that was showing that evening – something I had been blissfully unaware was happening even though I originally suggested the Cube show it ! 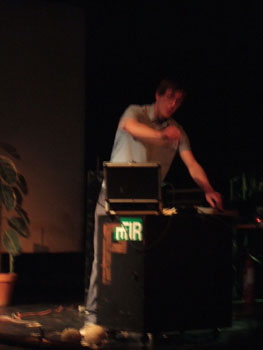 . . . demonstrating his bug brand stylings as part of the “inventor’s night” support for the film. This also included a shot, mostly wordless play about invention and ideas. It was all good, tho the audience was rather sparse – I don’t think it was advertised much though and it was a Wednesday . . . People were asked to bring their own inventions, the most prominent being S.J.Esau‘s noise drowning machine . . . 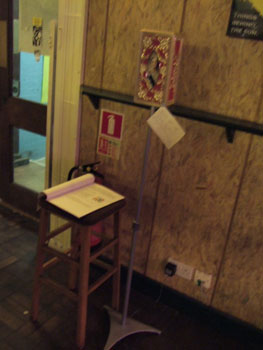 Jem didn’t turn up for the film ( he missed a treat ) generally right now there’s a lot of rushing around, mainly Venn related. Tomorrow as I write ( though not necessarily post ) I’m due to video Diss Miss and will be going through the complex video intricacies for Movieoke Set-up with Rod – might even make it to the Watershed’s CinÃ©formation: Film as Art in the evening . . .

This entry was posted in admin, Cutting Up My Friends Project, General, Video. Bookmark the permalink.