Cube Orchestra back in the Cube

After last week’s outdoor outing, Orchestra Cube was back on stage this Wednesday . . .

The plan had been to have some sort of practice for our part in the Here shop party, which involves playing with drawers ( that’s people who draw, not things in chest of drawers ( or should that be chest of draweri ? )).

The Here Shop drawers had been invited via email, but the bounders never even showed – probably scared of the Cube’s renowned rounders skillz . . .

Ale, on percussion, was most visibly worried about not having a practice along with the drawing before the performance – as a replacement we improvised to Richie’s new business card, and had a musical version of “Kick the Can“, who’s intricate rules I still can’t fathom – but seemed to be mainly based on a change in musical direction in the event of some can kicking.

There were some really interesting moments in the playing – partly due to the combination of monophonic instruments – as both keys and guitar happened to be absent this time there were lots of horns ( including new recruit Chris on Clarinet who wandered in on the busking last week ) and two bass guitars . . .

My “Cube” amp had it’s first on stage outing, though I didn’t feel I made the most of it – I’m still working out what I can do with it in the setup – and felt slightly outside and awed – probably the most interesting thing I did, I think, was use the stage steps on their side as my table . . . 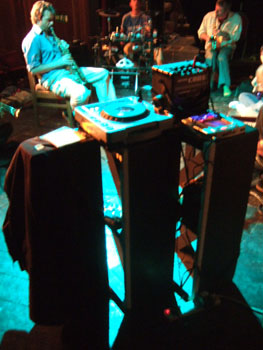 Friday ( which is tomorrow as I post ) for Movieoke with Richie and me ( as Max blackout ).

[ Incidentally, as I left after the OC practice, I met Movieoke regulars-and-stars, Martin Poulter & friends ( including Danbri, who just added a comment to the last Movieoke post ) on their way to see Bluescreen. ]

Saturday for the Here shop party for drawing and orchestra.

Then on Sunday The Cube will beat The Here shop hands down at rounders. You’ll see . . .

1 Response to Cube Orchestra back in the Cube