Hmpfh. Well, to be honest I returned from this month’s Movieoke feeling a bit drained and depressed. Don’t get me wrong, it wasn’t a bad night for the Cube – it was better attended than ever, despite it being holidaying August, but it certainly didn’t run as smooth as last month’s when it felt like it was really coming together.

Two crucial crew members were sadly missing and very sorely missed . . . ( we all now appreciate even more what you do do when you are there ! )

First absent-with-leave was walking movie encyclopaedia and DVD changist Hog, whose role was taken by a good humoured but tested Rod – already quiet inconvenienced by supplying and setting up all his equipment for all the Movieokes so far despite it always falling in the middle of much of his own work, and being give very short notice each time. He struggled all night locating first the DVDs and then the specific scenes from Hog’s extensive archive.

Second was the Movieoke human host and general overseer Tom, who’s big boots were stepped into by Ed Stoner ( sat on the left in the green t-shirt, in the Reservoir Dogs scene below ) . . . 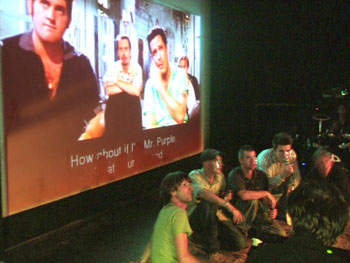 . . . who, though as he admitted was nervous to begin with, did a good job as on the stage presence for his first time – the problem was all the other organisational parts . . .

Along with Tom and Hog, also missing were . . .

. . . after phoning round James graciously filled the first two and me, Rod and FranÃ§ois – all inexperienced – cobbled together an initial sound mix which wasn’t exactly great as Richie ( on drums ) couldn’t really hear Colin ( on piano ) properly all night. I put my iRiver on random in the Bar, more important than you might think as people wait for the auditorium to open . . . which was quite a wait . . .

Colin, the musical maestro who keeps time better on stage, didn’t show up until 9, and the auditorium didn’t open til gone 9:30.

It’s not unusual for the Cube to run a bit late – but quite a few potential punters intrigued by the increasing popularity of the night apparently took the listed 8pm start seriously and left perplexed before the main doors opened, and more who did get in were put off by the elongated times in-between turns due to the searching for scenes . . . having said that I don’t think it actually looked too bad from the audience’s point of view . . . we all did what we could to keep it running along.

The audience did themselves proud in fact – there was no trouble getting people up to have a go – in fact there was more wanting to try than we had time for.

One group of enthusiastic regulars, featuring Dan and Martin ( pictured below chatting post the 11pm cut off with Rod ) . . . 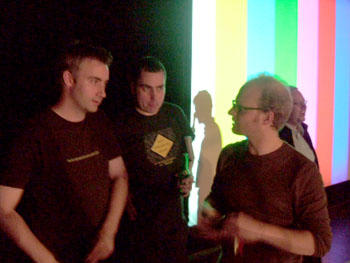 . . . brought a big bag of DVDs, all checked for subtitles and with very organised scene donating post-it notes!

Dan ( on the left ) also took some great pictures of the night too, which you can see here, the 1st of which, apparently, was posted live from the stage!

We need to keep up with this kind of style – the email list of films I was sent, and had made up into a fancy looking menu, wasn’t exactly accurate I discovered when I got to the Cube to set up at 6, and we were soon back to hand written ones.

As suggested before I really think we could benefit from making a list of specific scenes rather than just movies – though there is something to be said for spontaneity and flexibility – if Colin had prior knowledge of the Wickerman we wouldn’t have had that great moment last month for instance, but a firmer base to go off the rails from would be better . . .

I think in generally more co-ordination is needed, hopefully ( possibly ? ) with some hands-on help from instigator Mark and intelligent joined up preparation that means no one is over-stretched, or called in too last minute.

Anyway it is still a good and exciting thing, still in embryonic form, that is attracting much interest – it’s just that it could be so much better if the people volunteering to make it happen could have as much fun as those coming to see it / be it . . .

. . . anyway, enough complaining- it wasn’t all misery, after packing down me and Rod had fun finding faces in the projection room . . .

. . . and I got a lift back with our the equipments, which was nice ( our own that is, not swiped stuff from the projection room!).