The maestro is Dead! Long Live The Maestro! 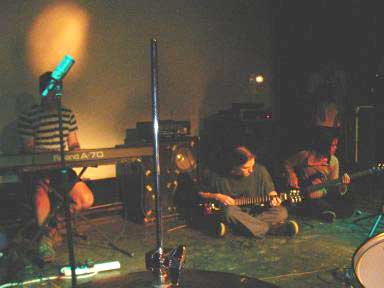 OK. Not true. But we had such a storming set tonight that one of the tunes was killed ‘Death (or should it have been Deaf?) To Peter Swaffer Reynolds (The Maestro)’ ‘cus if he’d heard the blues pop jam thing we came up with, he’d have gone tres mental.

However I’m sure if he’d heard the other stuff we came up with he’d have been pleased as punch.
We started off Moody and Jazzy 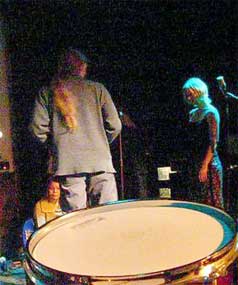 because (a) Gareth played some Brubeck on his sax and Joe Morello (Brubecks drummer for many years) is possibly my favourite drummer of all time. And (b) We kept the lights down. Man it was Crazeeeee. Gareth, seen here doing his Ian Dury impression 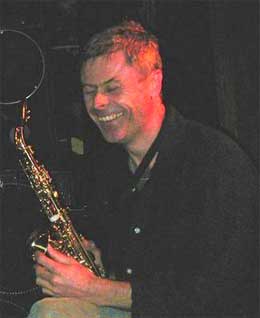 called that one (decided by spin the drum stick) Welsh Rare Bit.

Onwards and forwards. A very percussive song followed by Ellie kicking off the next one via the skill of Flute effects pedal madness 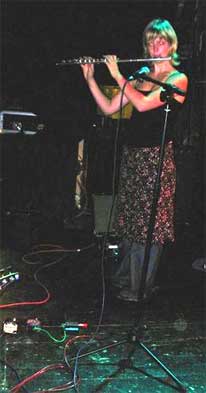 and Gareth danced to the beat

. It was a top tune, kinda like Sergio Leone meets, er, Ellie. So I called it Sergio Elleone meets the good, the bad and the ugly Orchestra.
It was beautifully moody, I think the mix of sax, flute and melodica (strangley shadow inhabiting Richard hence no pic) worked really well. Mind you the rest of us contributed alot too. Check out the sounds when they soon get put up (nudge nudge Marcus).
Lens (also known as Hugh) reminded us that not only is he an inavative and original guitarist (ie limited by talent) and a Photogropher, but he’s pretty photogenic himself 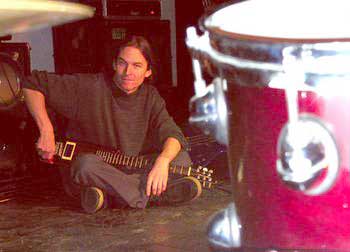 Dd I say how much I enjoyed today? My Quiff grew an extra inch or two (I said Quiff Mr Hopkinson) 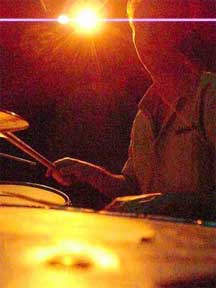 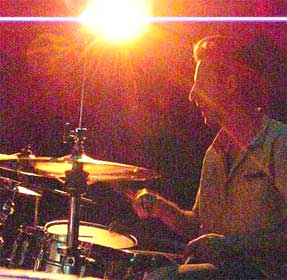 and did I say how moody it was?

Our penultimate tune was a reworking of Midnight Cowboy using Richard’s skill on the melodica and the effect pedals set up for Ellie. Persoanlly I love Faith No More‘s version, so I kinda bigged it up a bit, but then we brought it all back down again. We finished off with some craziness which was all good.
I found this week very satisfying and it was a great advert for what we can do, so big slaps on back to Tomoko, Ellie, Gareth, Marcus, Richard, Lens, and Meself. 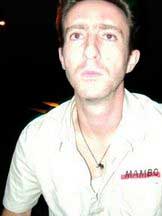 ‘oops didn’t mean to do THAT‘, Paradise

2 Responses to The maestro is Dead! Long Live The Maestro!