Posted on January 8, 2006 by richie paradise well it’s not me or Mr Hopkinson, answers on a postcard to the usual address.
The Cube Orchestra welcomed another new member (possibly two I’m not sure if Jon was just watching or joining). Nikki joins us after an education at the prestigious Guildhall skool of music. Now we’re a pretty inclusive bunch us Orchestra types but it’s always nice to know we have at least a couple of Oxford grads, at least one doctor and now a Guildhaller too, right on. Personally after my Ivy league education at Harvard, where I studied Eastern Philosophy, it was of to Sandhurst. Believe it or not I then continued my Education Captaining a great bunch known as The Gurkhas, now look at me, a shell of a man teaching for a living. Anyhow shut up man, whats all this education stuff about? Well I think in over a year (yes The Orch is a year old now) we’ve learnt alot and that is in no part due to the input that ALL of the orchestra has put in. This week was small turn out week so luckily not many turned up. Perhaps some weren’t turned off by the rumour that The Orchestra had gone all techno, not guilty (though only through the threat of violence ). Nay the laptop Ale was using was to conduct us through the medium of Powerpoint presentation, put sommet up and we play to it 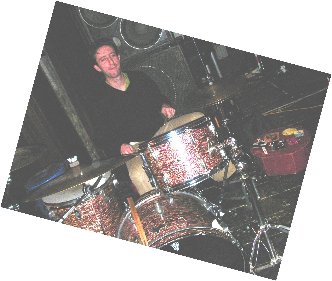 voila. There was some great horn blowing from Nikki and relative newbie Muz 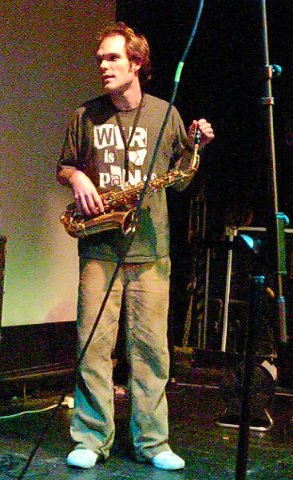 , they also endulged themselves with some microphone holder tapping too. Hey baby whatever works, right?, right. We ended with a piece I thought sounded like The Mahavishnu Orchestra, which takes me back to my good ol’ beloved Hindu (and some Buddhists to be strictly accurate) Gurkhas. Ah the good old Wheel of samsara not only dictates life but is a good metaphor for The Cube Orchestra, who hit the highs and the lows, groovy.

Have I told you about the sinister truth that The Cube is run by Robots? well the truth goes much much further, for it turns out the Cube is nothing but a Matrix style computer world, here is some proof I found of an earlier rudimentary Cube program (i.e. pre-Mr Hopkinson who seems to be the designer of this arts ‘utopia) ‘ Look at the shoddy graphics, shocking really how they’ve got away with it all these years, the bastards.