Now the Orchestra isn’t everyboidies thing, I freely admit to wanting to sometimes get up and slap some of the Orchestra when they are pushing the boundaries of pretension, but that’s something me and my Therapist are working at Tony Soprano style, (hey what the f.….). So it came as no suprise really when this very nice young lady

got up admitted it wasn’t her thing and scarpered, see 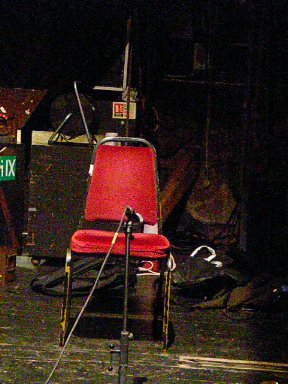 As you can see we miked up the chair for ultra pretension (it did a killer solo dude but lacked originality).
Barry looked worried

but got over it in nonchalent style

So no Maestro again so we shouldered on. Barry taking the ‘bring as little as posible angle’ that he’s persueing to a new degree by bringing a harmonica 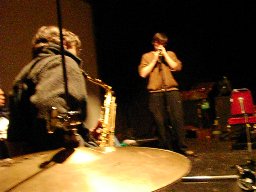 also blowing away were Mark and Belinda. We took our time getting going but the triple geetar attack of Kush, Will

(who I think looks like Robbbie Robertson circa The Last Waltz, but I could be wrong) and Leo 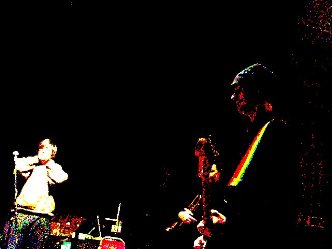 (who wasn’t that keen on my last picture of him so I’ve messes about with this one, no honestly) pushed things in a really nice, varied way. In a not really but kind of in the execution of it was reminiscent of how African geetar bands play different things that come together. I wouldn’t have danced to it mind.

Classy and talented Simone has been doing some great stuff on her variety of violins recently, this week she bought along some fancy electric violin which was in the shape of a Clef (I think), no picture of that ut here’s my attempt to pretend we are in France circa 1953 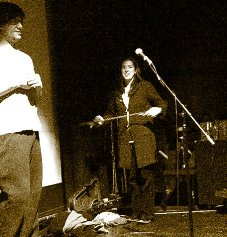 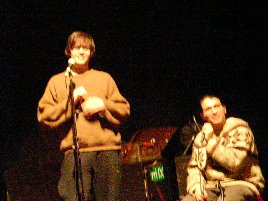 It’s always fun to do that and I hope were going to do a similar thing with story writers in the future.

A prett good session all in all.
Right I’m off to play footbie,

Big Love and ciao for now

This entry was posted in Cube Orchestra, General, pretend you're more highbrow than you are, Richie Paradise. Bookmark the permalink.