OK – reposting of Ben’s Sunburned review with my pics at last . . . I only arrived in time to see The Clear People ( who were my highlight of a night of highlights ) so the narrative of the images and the text kind of run along separate parallel tracks, but hey that kind of makes a Sunburned Cube sort of sense, I think . . .

For everyone who feels that if the Cube is anything it is a place for people to explore areas of their work that other venues cannot reach then two nights of Sunburned Hand of the Man may have been something not to miss… Not since the Klinker have a group of artists and thinkers taken the place and made it theirs for a night and given the impression, at least for a moment, that they spent most of their time hanging out.

It all started with a poster that to quote ‘while not a poster a member of the band may have produced seemed to capture what they we are about’ and was lovingly hand printed by The Lady Lucy and it ended with slipping and sliding to The Beatles and Mr Dylan before heading out to get some carefully prepared Chicken burgers at one of Stokes Croft’s finest.

So to the main acts. It all began quietly on the first night with Hush Arbors the solo vehicle of Keith Wood, who also plays a part in Sunburned and Wooden Wand, with a set of mournful country melodies juxtaposed with a bit of rock, backing was provided by John, Ron, and Mark from Sunburned. Out on the merch table Keith’s most recent album ‘since we have fallen’ stood out for its beautiful handmade cover and slightly surprising 12.5” size.

The last time Sunburn played the Cube the lights were bright and the projection screen laid bare but this time everything changed; they remembered that the venue was in fact a Cinema and asked special guest member Bridget Hayden of the Vibracathedral Orchestra to show the video piece ‘Ink’. With the lights down and the blood red curtains closed a cow’s head slowly appears from behind and as the curtains slowly roll back the vastness of Sunburned, this time a group of 5 + Bridget, slowly rumbles to fill the place with a throbbing base for the next hour and a bit. Again the Cube crowd was a strange mix of young and the older with, to quote the next night, a ‘lady with 3 fur coats’; all rocked backwards and forwards as the Ocean rolled its great waves over and over. At the end a Cube regular asked ‘what will they be doing tomorrow’ and one might take a guess: ‘ they’re going to do a play – working title “Get Thee to a Nunnery”‘. However, I’m not sure anyone could have predicted just how good this second night would turn out to be, and how it exposed the bottomless pit that forms the foundation of those East Coast Surf Girls.

So to the final day of the two day visit of SHOM at the Cube cinema which at 6.30pm it seemed that almost all staff for the night had not realised that the show begun at 7pm—this was in part due to the fact that the Feb program stated that both nights started at 8pm, editor please! As might have been expected this turned out to be little of a problem as by 7.30pm one slow burning drifter had taken a risk and crossed over the line into the land of Bridge, Hush Arbors, Ozone, Clear People, Man Cry, and of course Sunburn Hand of the Man.

… this was the night that saw SHOM strip themselves back to the bone to present a night of entertainment ranging from grown men crying…I know can you believe it… too two ‘stoned’ men making one laugh so much that I can’t really remember anything about that particular act!

Slowly the crowd swelled out and the show began with the Drifter, a breaded man wearing Sun glasses, in parting information about the evenings show; noting it would finish with the visual piece ‘Invasion of Thunderbolt Pagoda’ by Ira Cohen scored with a new sound track by SHOM, and then it began with Bridget leading the Bridge with a slight sliding feedback guitar. Following this was Mark’s side project Ozone which started from behind the projection screen with the deranged keys of the now infamous Cube prepared panio, sampled over and over and over. Slowly Mark with the support from John and Rob built up songs around this and then just as quickly two of them lay dead on the stage with the sound still growing and changing for how long who knows. 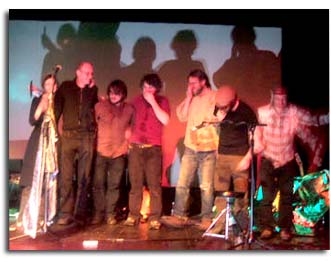 It was at this point in the evening, still early according to the clock, that for the few and many that had come expecting who knows what, it was clear that something was ‘happening’ and all the recent interest in this band was now being exposed and decomposed! While it is reasonble to say that the rest of the evening continued in this theme and a lot can be said about seeing 5 grown men cry as their driver informs them just what a waste their life has actually been and how few friends they really have, I feel it is time to stop and leave the rest too folk tales that will be passed on, changed and passed on again by the many followers of fashion as the years go by.

Finally, they will be back later in the year playing at the Green Man Festival along with Jack Rose, John Renbourn, and others…see you all there…

This entry was posted in General. Bookmark the permalink.