Comedy at The Cube

Last Thursday was the first of what will hopefully be a regular stand-up comedy night at The Cube. It was a private hire ( i.e. not organised on by Cube Volunteers ( though volunteers work the bar, front of house and ushering ) and open to the general public like any regular night ). The evening was put on by Comedypolitan, who brought with them a pretty healthy sized audience, possibly slightly straighter than sometimes, and presumably composed of many new to the Microplex . . .

. . . I heard at least one person initially put up a fight to pay the one pound membership on top of the high-for-cube-prices eight pound ticket price, though Lea, doing front of house, persuadably explained the volunteer-run principle.

I’ve always thought The Cube would be a good venue for stand-up, especially since seeing Rob Newman perform as part of an indymedia night back at thee start of 2005. There’s been quite a few Bill Hicks death-iversaries tribute nights, and things like Sunburned Hand of The Man’s “Mancry”, as Richie reminded me ( oops ) the improvisations of Movieoke ( Colin Smith is oftn featured doing the Colin Sell for Instant Wit ), SGX, even Lady Lucy, Casie O, Kid Carpet for QuWack, and, hmm, even, ahem, S&Hâ„¢ and mr_h’s câ„¢ could be considered comedy, I think, but this was the first solely stand-up night and I reckon it was a good start.

There were 2 main acts, Kevin Dewsbury and Paul Sinha plus compere James Cook. A slightly different line up to what was promised by the, by the way beautifully designed, programme ( I’m particularly glad to see the return of the cut-out mini guide – props to Kellen & Karolina ) . . .

. . . anyway, yes, the programme, and Comedypolitan’s site, listed the interesting sounding Pete Cain as the first act and Mark Olver as compere. I don’t know what happened but instead James Cook . . . 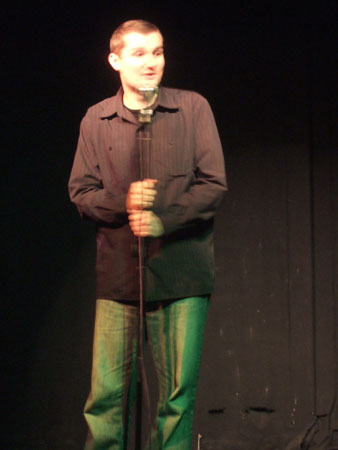 . . . warmed up the eager audience well and, though I missed videoing the best of them, made some impressively quick and sharp ad-libs.

Kevin Dewsbury was the first main act on who, like James Cook, incorporated some references to being in a Cinema – even asking if we actually still show films, possibly unsure due to Robin‘s excellent work blacking out the screen . . . 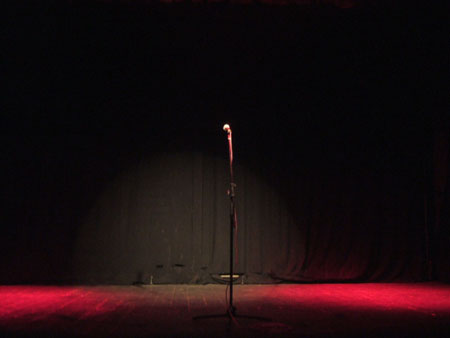 . . . I enjoyed all the acts, especially Perrier (or whatever it’s called these days) nominee Paul Sinha who was last on.

Overall I felt the comedy was obviously of a good standard, and a good thing to have at The Cube, though perhaps slightly mainstream-alternative / too obvious for my personal taste . . . I tend to enjoy the lateral chops of stuff that veers more towards the more absurd / “surreal” ( I’d say my favourite stand-up would be Steven Wright, who had his heyday in the late 80’s – sk8r in his thirties Dimitri Martin does something ( possibly rather too) similar these days – or Vic & Bob / Harry Hill type territory – who as ITV staples actually must be mainstream-mainstream come to think of it, so excuse me. Maybe Gary Le Strange, who was very funny at Latitude, might be quite Cubequese ( ? ) but if I had to think of a stand-up made for The Cube I’d suggest Josie Long with her DIY ethos and understanding “the other, perhaps somewhat obsolescent usage“, of the word amateur. . . ) .

Anyways, you can check out some moments I got on the memory card here . . .

Bit of a laugh, init.

Afterwards I ventured off to the newly, and socially, pimped out Thekla ( scrubbed up nice as it goes ) for Edan, the most masterful of mic manipulators playing on their re-opening night. Got video of that too, which I’ll just link to rather than embed as it’s not strictly Cube related and I don’t want to raise the ire of bluster blog bless-all himself AL . . . although there were more regular Cube faces there than at the comedy evening.

As you may have heard at the end of the vid, there’s more comedy performance this Saturday at The Cube from Wisbey and Johnny Trunk of, the really quite wonderful, Trunk Records fame doing their “Dirty Fan Male” show which has been a big hit at Edinburgh and elsewhere . . .

( please do follow the link for a full explanation on Channel 4’s page ( they made a film about it – The Cube’s showing a special version of the actual performance, not the film ) . . . ).

5 Responses to Comedy at The Cube