This time, I’m not so green

Recently due to one thing and another, I’ve been serially envious of others who have enjoyed various magnificences I’ve missed at The Cube and elsewhere of late . . . However nothing could stop me from witnessing living legend Damo Suzuki performing with also legendary, but shamefacedly previously unknown to me, Cul-De-Sac ( though I had seen member Glenn Jones perform at The Cube in November with Jack Rose ).

Friday was the opening of the Spike Island Open – a long weekend open running from the Friday through to Bank Holiday Monday ( today as I write ).

In a change with the usual tradition it also featured the work from some Artists based in other buildings across the city which, regardless of motive, seemed pretty mutually beneficial . . . though Spike Island’s presentation could have been better – no visiting artists were identified beyond a group studio name.

The Cube was represented in various guises . . . A version of The Cube Bar; Kate Rich & Lady Lucy’s Feral Trade Coffee / portraits collaboration; Bluescreen screenings; Dan Stringer via Jamaica Street‘s involvement and Jem, Rod and me via Blackout for a series of events and screenings in the temporary ‘auditorium’.

I arrived with Rod & Jem at 2pm to set up the space and met with a longer haired, nearly recovered Chiz, in impish mood after touring with Fuzz Against Junk . . .

We finished around about 5pm, which was when I’d arranged to meet up with Elin. I had thought our Blackout performance – Bug Planet – was at 8pm . . . but in fact it wasn’t until 10 ( through to 11pm ), but there was plenty of people and things . . .

. . . who I think went back to The Cube for the 2nd Herman Dune night.

Meanwhile, still in Spike Island, our performance went smoothly and bug free ( unlike the last Bristol performance at Ashton Court which was cut short by a power failure, or indeed, Chiz’s & my last performance at Spike Island which had the power pulled by the authorities for being too extreme ).

Saturday early afternoon I was back at Spike Island where I had arranged to meet Sam Jones ( Balky Mule, Crescent, Movietone ) to video for my cut-up project.

Before he arrived I got embroiled in a bit of setting up for Cul-De-Sac . . .

After some under railway bridge cowbell action, and a spot of long yellow tube fun we came back to the studios for pieminister pies and other refreshments . . .

Their Re-score was fantastic, climaxing with an intensity that brought a tears to my eyes and filled me with eager anticipation for their performance with Damo Suzuzki at The Cube later that evening.

Having my camera and tripod handy also meant I had a chance to video a superbly expressive Lev with body and face moves & timing like 21st century Charlie Chaplin. Thanks Lev if you’re listening.

After packing down I walked with Jem to The Cube where it looked like for a moment we were going to have 3 cameras filming the event, but due to, frankly not very riveting battery and tape reasons it whittled it’s way down to just me.

The event was amazing – from Fuzz Against Junk’s psychedelic support to Damo & Cul-De-Sac’s hour and half long set. At the end of each extended track Damo applauded the audience and, I think, shook all their hands at the end ! He certainly hugged everyone in the office before he left, and beamed all the time he was in there. Incredible. One in the ear for all those “not meant to meet your heroes” arguments . . .

Next afternoon I was videoing again ( for my project again ) – this time Freeze Puppy outside the Victoria Rooms – and another incredible performance from an uncommonly nice person. I just set up the camera and he immediately improvised wonderful melodies in a trance like state for a straight half an hour in front of the fountains.

After shaking hands and zipping up our respective carry cases we went off in opposite directions – him home, and me back to Spike Island to see the Picture This showreel.

However on arriving I once again got embroiled in Blackout business – this time loading up Jem & Rod’s stuff from their midday Flicker performance . . .

. . . and before I could get into the cinema space I bumped into a tessellation of cuboids . . . 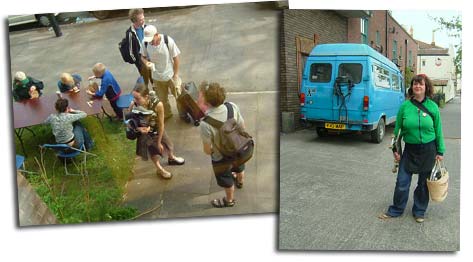 . . . on their way to see Kate off to the Station for the first leg of her Music for Sweets journey ( planned to encompass London, Brussels, Novi Sad, Zrenjanin, Arad, Sofia, Istanbul, Tehran and Bristol ). They were about to sail up the river to Temple Meads on Hog’s boat, which sounded more fun than staring at a screen.

After dropping Kate off we went back down the river. I videoed Lucy as she interviewed me and drew my portrait on the boat roof ( not a portrait either of us was particularly happy with, truth be told! ).

At the other end there was some personnel swapping . . .

. . . Me, Lady and Kyla stepped onto dry land, and I videoed Aaron drumming with pencils.

After a strange encounter with a dog-on-string philosopher ( I think called Richard ) and then Cube enthusiast Charles who was upset that Nothing Can Surprise Us didn’t seem to be running to the prescribed schedule . . .

. . . we lost Kyla and Aaron, but gained Hannah who I videoed storytelling ( and lady skating ) as we made our way to Richard and Kari’s barbecue . . .

. . . where we met up with ( amongst others ) old school Cube faces Kathy, Laura and Julian.

Meanwhile, back at The Cube, Nothing Can Surprise Us continued, and ( as far as I know ) Hog put on a Volunteers’ screening of the Film that inspired Cul-De-Sac‘s name, um, Cul-De-Sac ( see also here ).

1 Response to This time, I’m not so green