29th of September : Orchestra Cube do their first rescore – ‘Brazil’

This has already been covered by Richie, so there’s not much to add, in fact there’s not even much photographic documentary from me . . .

. . . but going through the pics it reminded me of almost nearly vaguely, to be honest not really at all, interesting “life” incident that must have happened later in the day in the Picton Takeaway when independently various Cube regulars, Hog, Lady, Me, Morgan, James and Colin arrived just about filling that space up. It was a shame that The Cube itself was far from full for the Orchestra’s rescore of ‘Brazil’, though those that were there seemed to be captivated – Rog How the sound tech described it as “Mesmerising”.

Doesn’t take a much to work out that the poor turnout was due to poor promotion, something we’ll hopefully sort before the second Orchestra Rescore – ‘The Wild Bunch’ on Thursday 22 December 8pm, at, oh yes, The Cube. Ink it in to your schedule now.

We had some fun fast-forwarding sections of ‘Brazil’ as it was played from DVD and the orchestra continued re-scoring, though this technique won’t be used with ‘The Wild Bunch’ as it’s going to be shown from original print.

Which featured performances by The Hard Returns, The Chap and dancing to The Chap, the Rod & Ray dance ensemble . . .

. . . the accessory of the season was still going strong, and tied in well with the O.G. ( Original Gentlemen ) Chap theme . . .

. . . Movieoke suffered a bit from going on later, to a more lubricated and, in the main, uninitiated audience. It wasn’t terrible, and several people who saw it for the first time said how much they enjoyed it, but I suspect at the point in the evening, if I’d been a punter, I’d have probably favoured the frenzied dancing in the bar ( pictured much much later and much much less fuller above ) . Still Colin, Richie and Tom did a sterling job under the conditions and Hog amused us with ‘Bailout‘ interludes . . . 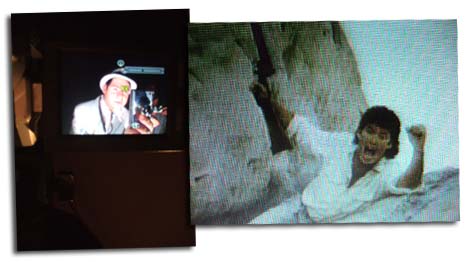 . . . and I got a chance to do a movieoke myself at the end of the night, stepping out from behind the Max to be Darth Vader to Tom’s Luke.

Earlier in the day Ali had insisted on borrowing my camera, and then disappeared in to the staff toilet. Fairly odd behaviour one might think. When I checked the camera I saw he’d taken various pictures of the, ahem, palimpsest of promotional material and graffiti that has slowly built up over the last few years . . .

. . . by the time of the party it had all become a bit more ordered and a lot more colourful with various excess programmes being used as wallpaper . . .