Not the first recording of this, but, for now at least, the latest . . . Herman Düne, as if you didn’t know, played a show for kids at the nanoplex, and a show for the ‘dults at the strangely similar looking microplex all in the same day.

I missed the animation that was screened first, but got there in time to video, and photograph . . .

. . . the first performance, which was followed by an intermission and gingerbread men care of the Blackout Blusherettes . . . 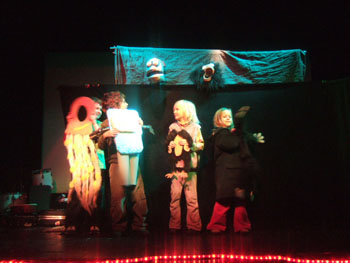 . . . which was followed by the second short HD performance, with mini on stage chorus for the last song . . .

. . . which lead on to a nano-stage invasion and a musical chaos that even the Cube Orchestra may never achieve . . .

. . . which concluded the first part of the day.

. . . and Tom ( as in Freeze Puppy Tom ) arrived to support the adult show. FP walked mechanically onto the stage to commence his, as ever unlike-anything-else, set . . .

. . . and concluded with an audience involving version of Happy Birthday for his Grandmother, who was actually in that there audience. 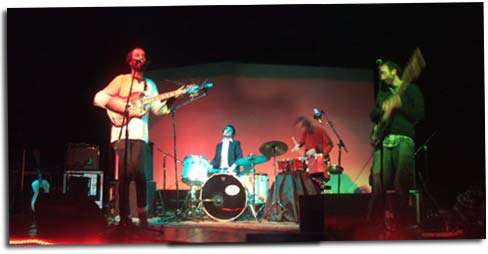 . . . wowing the sell out crowd, including enthusiastic fans who gave them drawings and ukuleles . . .

Rounded off, for me at least, by a round of TeamBrick impersonations in the office . . .