Ashton Court WE Salute You 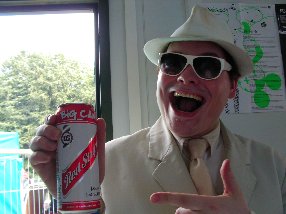 But The Cube Orchestra salutes yew Ashton Court, Not ‘Arf
Barry toasts you 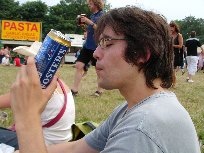 Bel and Ale send you love 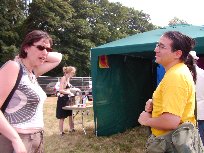 because you guys were great. Most Love of all to Blackout Arts for giving us the opportunity to play, we love you guys the mostest.
So it was a beautiful day, even the traffic wasn’t too bad getting there. Various band members 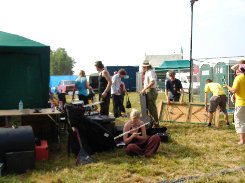 made there way to the tent for our pre match interviews and psych up sessions which I can only describe as being similar to that bit in Star Wars with that kind of Squid thing, anyhow here’s a spurious link.
Hunting Lodge played before and boy can those young fellas make some noise. Great stuff, kinda like The Jesus Lizard but with a whole new edge (ie a semi naked drummer). The Punters came streaming in when they heard we were about to play 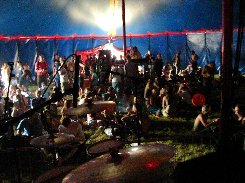 We played to several visual delights, first Liam’s Burlesque film A Grindhouse Romance which was great and i felt ever so proud when I told everyone Liam had made it (with help from his talented friends I add) and the crowd whooped louder, aw shucks I was made up for the young fella. Then there was some confusion as to if we were going to play along to Kyra’s dancing films (see last blog) or Mr. Hopkinson’s Cutting Up My Friends. Thankfully we managed both but not before Max Blackout gave me and everyone one around us a huge scare 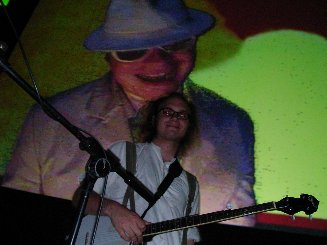 We finished by really giving it some Chutzpah to Kyra’s last dance clip (the Faithless video that I’ve blogged about before), really great fun and an excellent audience 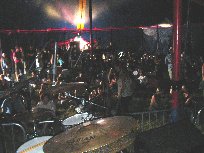 who really made the gig what it was because they were enthusiastic and appreciative. Right on.
Thanks to

for organising it.
Afterwards we really really buzzing, it’d had been a fantastic day.
It’s been a few years since I last played Ashton Court and it was nice to get that buzz back for the festival again. Hopefully if it can sort out some of the hijacking and pricing issues that have changed it into not effectively being a community festival. 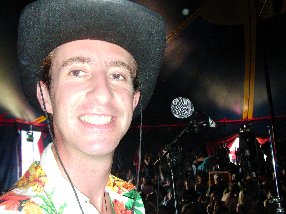 This entry was posted in General. Bookmark the permalink.

1 Response to Ashton Court WE Salute You