Saturday Venn started for me with the end of the demo derby at The Cube . . . 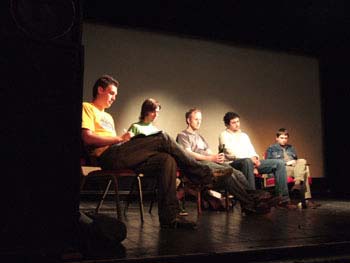 Apparently, Jonno later told me ( hosting and on the far left ), for the first few tracks the monitors had all been facing away from the panel, not necessarily conducive for fair appraisal . . !

Another, sort of arbitrary factor was only playing parts of longer tracks – something picked up on the Choke forum where a basis away from electronica was noted. Also , rather harshly, posted there was that Motorboy ( Jonno ) and ‘Ladyboy’ ( Lazerboy ) were a “pair of Nathan Barleys”, and “The guy second from right looked, talked and acted like Dan Ashcroft”.

As a sidenote, I think there’s a lot less sunglasses wearing than usual despite the bright June weather, which may be due to the fear of being labelled a Barley – if only the ridiculous News presentation had reacted like that post On The Hour and <a href="The Day Today, rather than people moderating harmless ridiculous fun . . . anyway, I don’t know who the ‘Dan Ashcroft’ fella is, though he does respond in the forum which is worth going through for a range of perspectives before it strangely turns into a caps & hoodies debate (!?).

The person in the middle is Dave Howell of Fat Cat Records, I don’t know who’s on the far right. In their summing up they said the standard of submissions was impressively high. I did catch the favoured track of the panel which was a gorgeous improvised piece by a young brother and sister duo.

Chiz had been cueing the tracks, and he and Esther said they’d heard me on Venn radio that morning, which was news to me – turned out it was part of Ali’s interviews with Cube volunteers about this whole Cube business . . .

Meanwhile on Venn radio at this point was Jim Backhouse and Magz Hall
from Resonance Fm . . .

That was backstage in the Cube’s ‘green room’. The next stage was to bring out a faux radio station on stage – though faux it was broadcast from. What I mean is there was a fun backdrop . . .

The set up took a while, and Dotty Girl ( of Chiz & Esther ) keep inquisitively climbing the stairs between busting some fresh moves on the floor.

The radio continued from the green room, but with so many performers in the place space was at a premium. There was a string quartet ( minus 1 ) practising in the office . . .

. . . and my brother arrived from London, so we popped back to mine to drop off his stuff and met Chani and Lady on the way . . .

. . . Lady on the way to Dj Relay with Jay Le Surgeon, TuKatz, Randek and Spanner Magic, apparently going venue to venue on a tandem – something I sadly have no pictures of.

Mark and I headed back to the Cube and caught a really brilliant performance, barely marred by a bit of an initially dodgy audio mix, of Joy Division’s ‘Transmission’ by Rasha Shaheen and Emily Breeze that reminded me of P.J. Harvey and Bjork’s take on ‘Satisfaction’ . . . 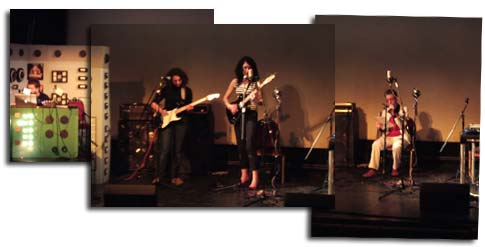 There were loads of artists performing great stuff in the radio circus – SJ Esau, Joe Volk, The Max Milton Quartet, Mole Harness, Joe Grounds, Ducan Fleming ( reading a story in a blinding white shellsuit ) to name a few. These had various filmic interpersions that worked well in the auditoruim ( not sure about how it sounded on the radio )
. . .

. . . I think the main highlight for us was Team Brick’s incredible feral vocalisations (pictured a few pictures up next to the strings . . . ).

I missed some of the performances as I went backstage with the other Orchestra Cube members . . .

Lead by Jesse in a bird head ( my brother thought it was a penguin, but I thought more likely a magpie ) the Orchestra was to burst on stage and then burst out of The Cube taking the audience with us as we made our way to the Malcolm X centre.

I didn’t feel the bursting on was as dramatic as it could have been – for the march we all had portable instruments so didn’t compete that well with the previously amplified stuff on stage, however the number of performers and genuine strangeness was on our side . . .

The procession perturbed various passer-bys, including inciting one bizarre heckle of ”go to church” by someone who later on was seen rummaging through the stuff left for the charity shop opposite the Salvation army – pure Stokes Croft magic. Without Richie the rhythm was somewhat lacking which bothered me a first, but I then came to enjoy the peculiar amorphous twists and turns.

The entrance to the Malcolm X Centre, after a brief standing performance on the steps, had the bar staffs’ jaws on the floor in confusion.

The plan had been that I would take the record I’d been using off the portable and onto the decks as a transition, but as it happened the system wasn’t ready. Still the Orchestra played in the building conducted by the bird creature using Peter’s hand sign repertoire.

I think I’ll continue into the evening’s events in yet another post . . .